Today we carry on the story of my journey through photography, from the film to digital formats. More specifically, camera bodies where I detailed my early days of 110 film Instamatics through the progression into Single Lens Reflex cameras with Chinon and onto more professional grade Canon SLR film bodies.

The previous post left off with me at the brilliant Donington Park race circuit in Castle Donington, Leicestershire (England). At that time, I was armed and ready with my first Canon film body, the EOS 650 and 35-70mm & 75-150mm lenses. The EOS 650 would shoot at 3 frames per second, not exactly super fast for motorsport. It was no way the top Canon equipment but it was not the bottom level either.

I was working freelance for one of my hometown newspapers to cover a local race driver, Chris Hodgetts (two time British Touring Champion), racing in the British Sportscar Championship. 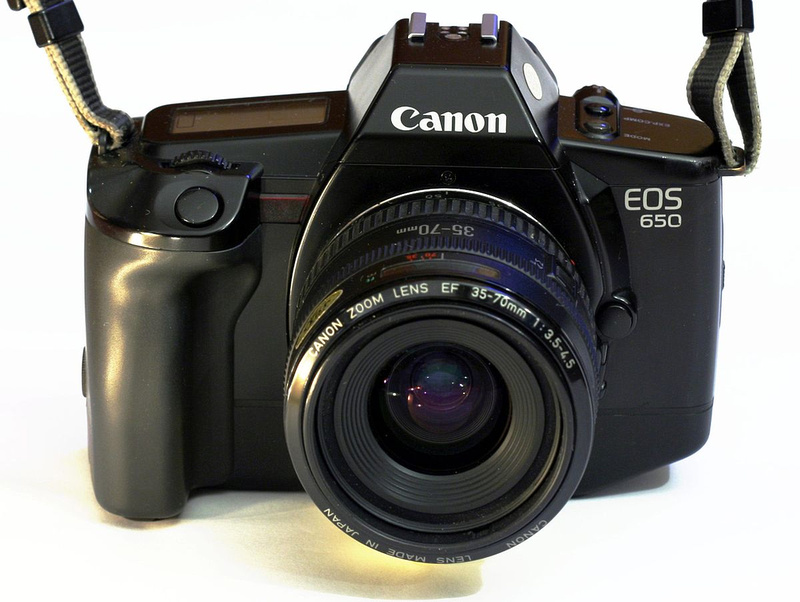 I met with Chris and was introduced to the team. Getting to know the race team is vitally important to gain trust and the permission for access to otherwise unauthorized areas. Chris introduced me to the team manager. He asked me what kind of shots I’d be taking and where I’d like to be. After assuring him that I would stay out of the way and not shoot “sensitive areas” of the cars, the team manager asked could I “get some shots for us?  I have some gear and a bit of film with me, you can use it if you want,” he added. I recollect wondering what “gear” he had. I remember thinking, “nothing decent I bet.”  Boy was I wrong !!!

We walked from the team hauler, out to his car. He popped open the trunk and opened this huge holdall. There must have been a pause….my mouth was left gaping…..I was speechless. There in his hand was a brand new Canon EOS 1 complete with Canon's Power Drive Booster E1
grip which upped the standard frame rate 3 fps up to 6 frames per second. Attached was the amazing and huge 300mm f2.8 L series lens !!! 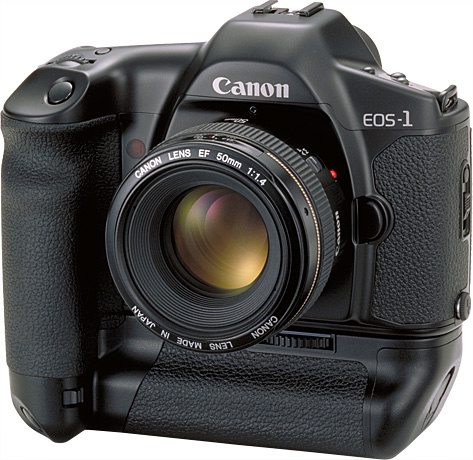 Now, this may not seem anything to you back then or as you’re reading this now, but at that time, the EOS 1 camera and 300 f2.8 L series lens were the holy grail of equipment for motorsports photographers !  I calmly took hold of the camera and lens….man they were HEAVY. It is hard to comprehend how heavy film cameras and lenses used to be. Very little plastic was used in the professional line of Canon and Nikon equipment. Nowadays there are exotic materials such as Titanium used in the professional digital gear. I’d not actually held either of these items in the flesh. Many times I’d anticipated the day when I’d actually own them but that was as close as I’d gotten. I’d hoped that my lack of outward expression or spoken words hadn’t given the game away and that I’d hidden my inner pleasure and maintained my “professional persona”. This was going to be a GOOD day to shoot some racing !!! 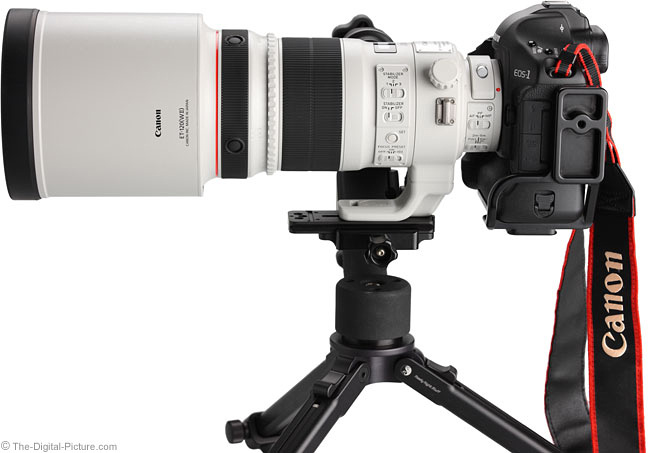 The team manager handed me a bag of color film….”here’s 12 rolls of film….shoot what and when you can, I know you're here to shoot for the paper. Heck, shoot your film through it if you want”.  You can image I didn’t need a second to decide to do exactly that !

I spent the day trackside capturing Hodgetts for my assignment and the team, switching from the team supplied Kodak color film and my publication supplied black & white Ilford HP5+. My regular gear wasn’t excessively heavy or bulky and was easily used handheld … unlike the substantially heavier EOS 1 and huge & heavy 300mm lens !  For a day shooting at trackside, hand holding this beast of a setup was a tough task. Thankfully the lack of monopod didn’t ruin the day and supporting the lens tripod mount on my left knee that was perched on the trackside wall worked perfectly for longer shot spreads.  The shot below was used by the publication to accompany the report on Hodgetts' weekend. 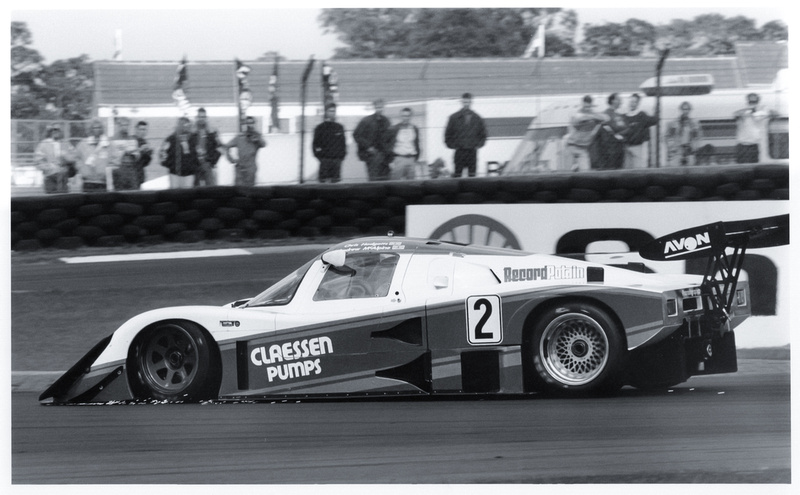 I've been covering motorsport in Europe and the United States now for over 30 years and I have to say that this image is still one of my favorite captures. I don't know if it's the first time I shot with professional camera equipment, or the first time shooting LeMans type Sportscars, or the sparks from the Titanium skid plates under the front spoiler. Whatever it is, this image is very dear to my heart.

After being spoiled by a foray into the professional motorsport camera equipment world, I decided that another camera body upgrade was needed. A trip to Jessops Camera store in Birmingham (England) saw me quickly replace the EOS 650 with a new Canon EOS 10 body. Another EOS 10 was added 3 months later as a backup.

I continued to shoot with the EOS 10 bodies throughout the 1990’s and into 2001. The main topic of my photography was motorsport with 15 to 20 weddings per year intermingled for good measure. 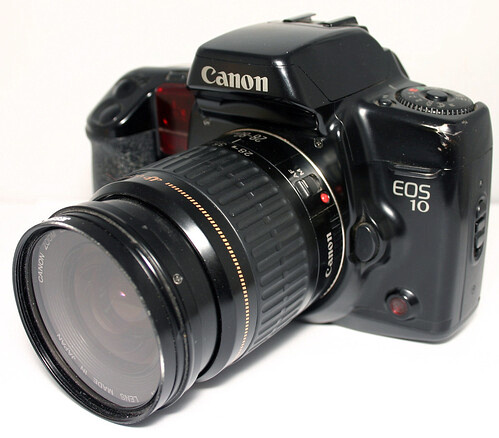 Freelance newspaper and magazine assignments saw me cover British and International motorsport on both four and two wheels. The opportunity to document the build and shakedown of a BMW M5 for ED Arnold Racing and then a trip to Laguna Seca Raceway in California to cover Hodgetts race the M5 in the Bridgestone Supercar Championship came in 1993. Nascar events at Charlotte Motor Speedway, Dover Downs Speedway and a number of teams shops in and around the Mooresville NC area were the highlight of 1989 and 1990.

My move from England to the North Carolina in the USA saw a huge reduction in my photography work. I made the decision to sell my SLR gear and purchase an Olympus point and shoot digital camera. I was not heavily inspired to shoot much during the very early 2000’s and can’t actually remember what model the little digital Olympus was !  A new life in a new country was ahead and other things took priority over my photography.

My move from NC to Texas in 2005 saw my love for photography rekindled along with a return to motorsport and wedding photography. The choice of equipment was a tricky one. Digital was now the big thing, film was all but dead. I had no real experience of digital cameras or indeed the digital world of photography. Gone were the days of taking film to the lab, passing on any requirements reference the processing the negatives and printing of the images. Now it was Jpegs, RAW, megapixels, computers and Photoshop !

In the next edition of the Bourne Images Blog.......

"How it all started...Part 3".....The crazy world of Digital Photography and how an invitation to shoot for a motorsport magazine from across the other side of the world led to meeting a racing hero !