Over the last few years, we have seen a significant increase, year on year, of firearms sales. People are concerned about the state of the world we live in. The biggest growth in gun sales is in the personal self defense category where men and an increasing amount of women are obtaining their LTC (License To Carry) / CCL (Concealed Carry License), whatever your state chooses to call it. The decision to carry a firearm to protect yourself and your family is something that should not be taken lightly, so choosing the right firearm that will work for your situation, be comfortable to shoot and comfortable to carry is no easy thing and only one part of a big package. Let me explain.

You've made the decision to purchase your first firearm and passed your carry certification course. Time to get yourself a holster and then you're set, right ? Not exactly. It's all too easy to make a snap decision to buy that all singing, all dancing, super-duper flash looking holster you saw at the gun show, or at the local gun store or even in one of the gun magazines at the store. Do that and odds are that you'll find yourself not carrying at all. It's too bulky to wear, too difficult to conceal, it's painful to wear, it's too powerful to handle when you shoot it, or you can't hit the target. All these are classic signs that you didn't think everything through beforehand. For the many of us who have found ourselves in that exact situation, it is somewhat comforting to know that most gun owners who decide to make the commitment to concealed carry go through a lot of these issues until they find the right gear; and then train, practice and adapt. 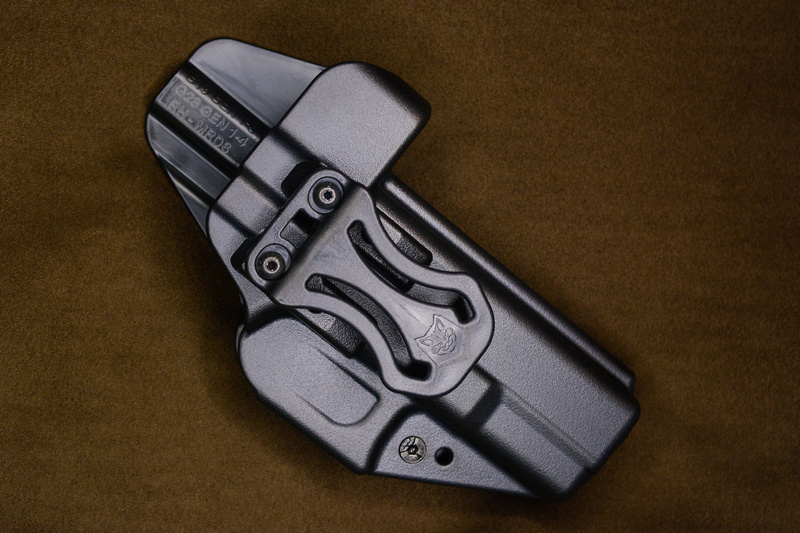 For now, we're going to jump ahead, just a little. You've done your due diligence, decided on the correct pistol and caliber that is right for you - one that you can handle and be on target with and one that you can commit to carrying...all the time. Now it's time to choose a carry method for your firearm. This, again, is no easy, quick choice.

Are you wanting to carrying on or off body? There are pros and cons for both methods, but it really is dependent on your personal situation. Body size, clothing choice/circumstances, and can you legally carry in the places you will be going to?  For today, we're gong to look at the "on body" carry option.

Many holsters out there in the market today are made of Kydex, the thin(ish) mold-able material chosen by so many of the smaller and a few of the larger holster manufacturers. These holsters can be easily customized with different colors, finishes, fancy and elaborate designs with attached magazine holders and other options. Obviously, the more fancy you make it, the more options you add on, the pricier it gets. Also, there is still the possibility it will be uncomfortable to wear (sharp pointed edges). Add more options (spare magazine holder) and you increase the odds it'll print (be seen through your clothing) and be obvious to everyone you're carrying a firearm. Not exactly concealed carry now is it? 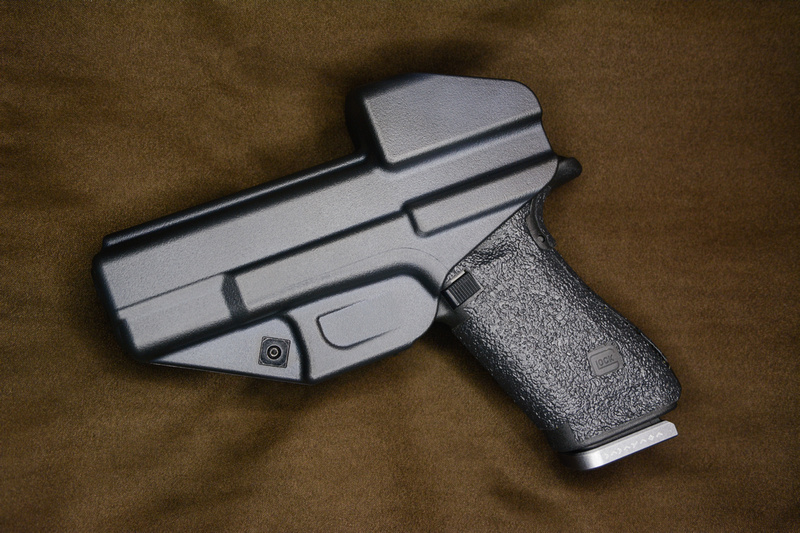 In today's blog, we take a look at a couple of new to the market holsters that are predominantly designed for on body carry. Unusually for the concealed carry market, these are not made of Kydex, and the company making these holsters is actually situated right here in the U.S. of A...to be precise, Post Falls, ID. Welcome to the review of a series of IWB and OWB holsters from new manufacturer...Warcat Tactical. 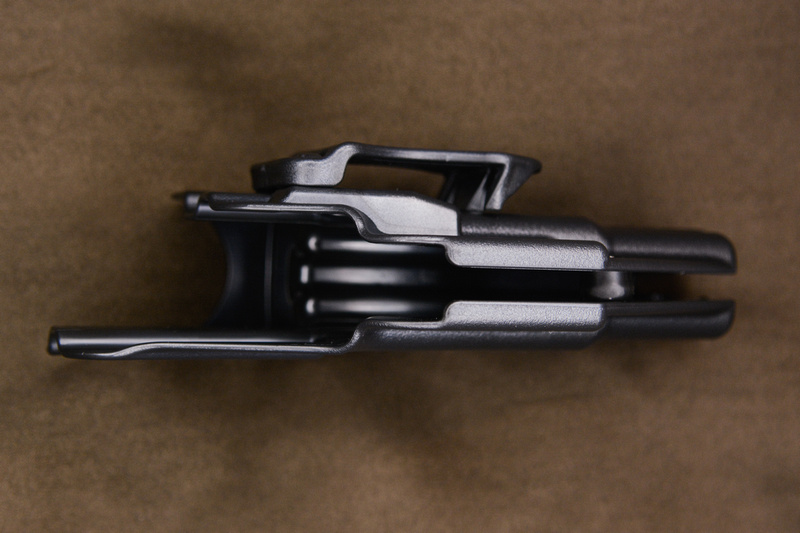 Warcat Tactical is a new entrant into the already packed arena of pistol holster manufacturers. They are retired military, retired & part-time law enforcement, competitive shooters and hunters, so they know a thing or two about what it takes to make you feel comfortable enough to WANT to carry your firearm with you.

The products offered by Warcat are different to so many of today's holsters as they are made from polymer that is injection molded to fit each specific pistol. Their holsters are said to be 20% lighter, 40% tougher and 80% more heat resistant than other molded holsters available in the industry. That is a claim I can vouch for after opening the packaging. The thickness or should I say the lack of thickness for an injection molded holster is very pleasing. Other injection molded holsters tend to be noticeably thicker than the kydex type. The two offerings (IWB & OWB styles) released so far by Warcat are no thicker than the popular Kydex material used, so bulk and the possibility of printing will be reduced. The inside and exterior finish of their holsters is equally impressive. Smooth pistol form/shape transitions, no sharp edges. Nice job Warcat Tactical! 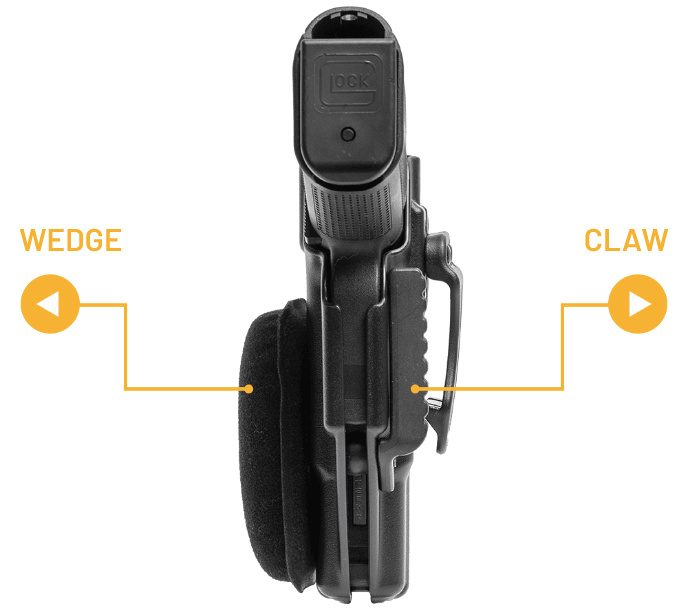 Warcat Tactical include a wedge and claw with every IWB holster. The belt clip can be adjusted to one of three different "ride" heights by simply undoing the mounting screws on the clip and switching the height position. The wedge can be stuck onto the inside of the holster to assist with printing reduction. It also adds a comfort factor with the holster pressed against the body. The "claw" can be attached to the belt clip side of the holster (see image above) when the IWB holster is worn at the appendix position. When wearing a belt and putting the IWB holster with the claw at the appendix position, the pressure of the belt across the claw pulls the lower part of the pistol grip in toward your body, which in turn, reduces the possibility of your pistol printing. The claw is most commonly used when wearing a firearm at the appendix position.

However, there are many that feel when using the claw on an OWB holster, it is still comfortable and effective in reducing printing when wearing at the 3 to 5 or 7 to 9 o’clock positions.

Pistol retention (the amount of grip or hold the holster puts on the pistol) on both the IWB and OWB can be adjusted to suit your draw tension preference. The adjustment Allen screw is just in front of the trigger guard (see image below). The fine people at Warcat include an Allen key with your holster. 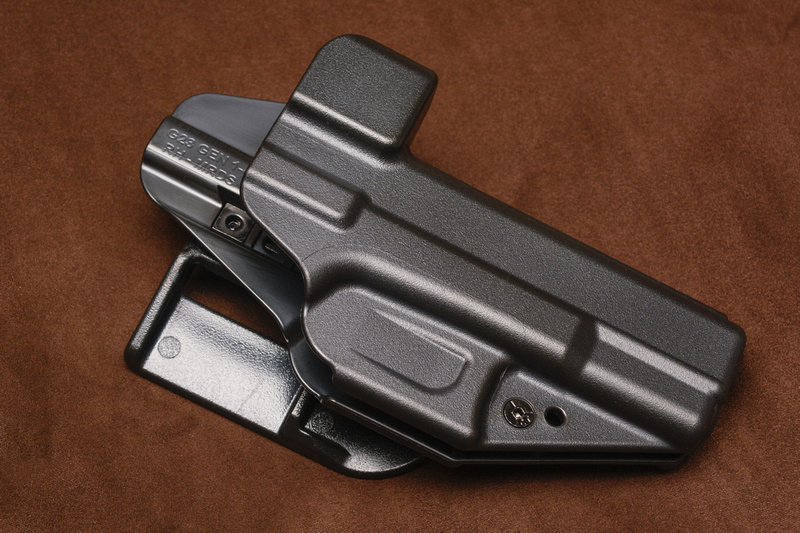 Warcat Tactical Outside The Waistband (OWB) MRDS Holster for the Glock 45 MOS.

The Outside The Waistband (OWB) example from Warcat is no less impressive. It has the same excellent finish and It is really nice to see that the quality control across the two different styles of holsters has been maintained. So often, manufacturers will put all their eggs into one basket and tend to have a bias toward their IWB holsters, only for their other products to appear to fall short of the same standard. Each Warcat IWB and OWB holster has the particular pistol fitment option for that holster embossed into the sweat guard which can be seen clearly in the image above.

The OWB comes set with a neutral cant position. It be adjusted by removing the screws from the paddle fitment and selecting either a positive or negative cant and then refitting the screw. I always suggest using a little drop of Blue Loctite when removing and replacing any screws on holsters and the like.

Warcat's manufacturing process has allowed them to make and offer their IWB and OWB holsters with an integral pistol mounted MRDS (modular red dot system) hood option for no extra cost! The MRDS hood protects your pistol red dot from any impact and debris plus it also stops the red dot from digging into your body. So many holsters out there only offer a standard red dot cut out. Another thumbs up for Warcat. 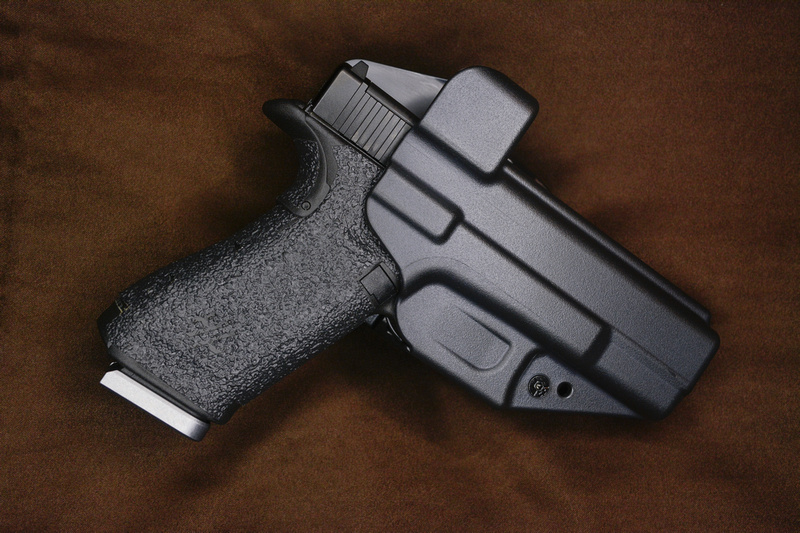 The impressive in-house designed and Warcat branded 1.5" belt clips for the IWB and a branded, sturdy but still flexible enough, dual purpose paddle mount / 1.5" belt clip is mounted on the OWB. Yet further proof that the people at Warcat have done their homework and taken notice of all the complaints from other holster brand owners over the years. I have to say that this is quality not normally seen unless you're unloading lots of cash on a Safariland holster. I should know, I own four Safariland holsters and I rate them. Since receiving the Warcat products, I have to say I like them a lot. They say there are more products in the pipeline. Would it be too presumptuous to expect magazine holders will be released soon? It'll be interesting to see if they delve into the law enforcement and military level 2 and 3 retention holster market, I hope they do. I'm genuinely excited to see what they come out with next. 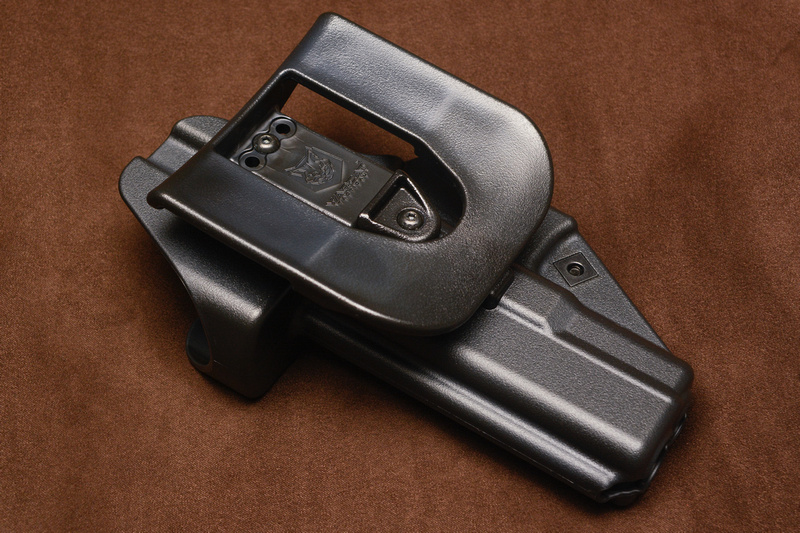 What is also impressive is that all Warcat Tactical holsters come with a 30-Day Return Policy and their 9-Lives Warranty. If anything on your Warcat Tactical Holster ever breaks for any reason, they’ll repair or replace it for free ... you can't ask anymore than that, can you?

At the time of writing this blog, Warcat have IWB and OWB holster fitments for Glock, S&W Shield's, Sig P365's and Springfield Hellcat's.

You can find the available fitment options for those brands HERE  at our Amazon affiliate link. Their prices are amazing. Go check them out and let me know what you think. I believe Warcat Tactical are going places.