Image Review: Australian V8 Supercars 2013 at The Circuit Of The Americas

Welcome to the Bourne Images Blog and our first official post. We plan to post a weekly blog, some small, some larger. They will be on a range of subjects but all will be related in some way to photography....obviously. Some will include an image, some not.

Todays blog is a look back at an image and an event very dear to my heart. I am a HUGE fan of the Australian Supercars series. It is a sedan based motor racing series that has seen a few changes of car styles and engine configurations since since I started following it back in 1986. Over the years, it has been labelled "The Australian Touring Car Championship", "Australian V8 Supercars", "V8 Supercars" and currently "The Virgin Australia Supercars". The series currently is in the last year of racing with solely V8 engines....from 2018 the rule book allows teams to run anything from 4, 6 or 8 cylinders with normal aspirated engines or turbo charged. The series is shown in many countries outside of Australia and New Zealand....the UK, Europe, Canada, The Far East. Unfortunately, it is not commonly aired in the USA, only rumored sporadic showings on the CBS Sports Network.....personally, based in Texas, I never see any CBS Sports listings for it.

The image below is from May 2013 when the then named V8 Supercars made their one and only visit to American shores......"The Texas 400" at The Circuit Of The Americas, Austin, Texas. Despite following the series since 1986, I had never had the opportunity to see the racing in person......until then. There were supposed to be 5 visits of the V8 Supercars to Texas but year two was cancelled due to a "date conflict" and then shortly after, the agreement between V8 Supercars and the organizers at COTA was disolved completely. 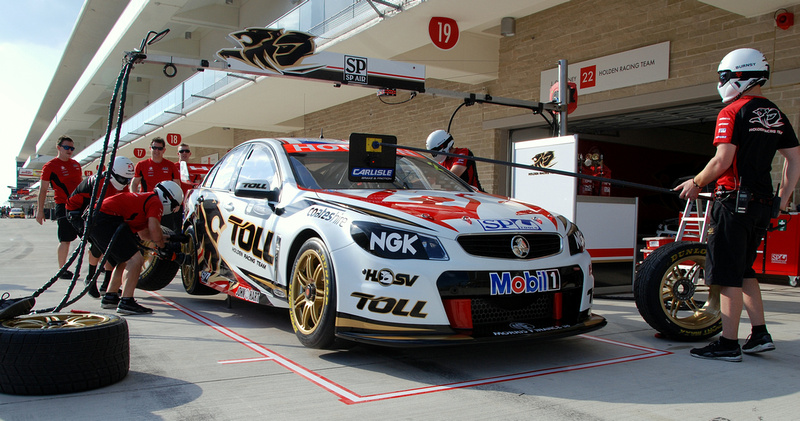 On the lead up to the Texas visit of the V8 Supercars, I was offered to incredible opportunity to be a guest photographer for the Australian V8X Magazine photography team, led by Justin Deeley and second photographer Peter Norton. OBVIOUSLY I snapped it up !!!...sorry for the pun.

This shot was taken on the Thursday evening as the teams began setup and pit practice prior to the on track events on the Friday, Saturday and Sunday. Here, the Holden Racing Team were going through their routine pit stop practice with the #2 Holden Commodore of Garth Tander. The eagle eyed among you will notice they are using the treaded "wet" weather tires and not the normal "slick" un-treaded tires. The governing body of V8 Supercars ruled that for the un-timed practice sessions, teams would use the treaded tires so that drivers could acclimatize themselves to the track layout without using up their allocation of slicks for for the event.